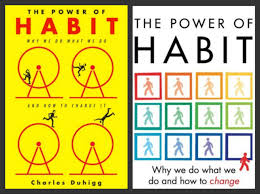 This is probably one of the most impactful and practical books I went through in 2014. Everyone knows a thing or two about habits: good and bad. Just how exactly do you form a habit or break a bad one?

The author starts off by laying out the habit loop

Essentially, some cue initiates a routine, with some reward afterwards which makes the outcome of the routine satisfying. Cravings are what power this loop.

So basically, to create a new habit you just need to find an obvious cue and clearly define a reward. An example could be: lay out your gym clothes by your bed, so you wake to see it when you wake up in the morning (Cue). Go running (Routine). Drink a smoothie after your workout (Reward). You can fill in the blank, but that’s the basics of building a new habit.

Overcoming a bad habit? A little trickier. We need to first understand what craving is driving that specific behavior. Sometimes, it’s about remaking the habit by leaving the cue and reward as is, but changing the routine. This could be taking fruits to snack on when the craving for vending machine junk comes on around 3pm.

Interestingly enough the author highlights how personal belief, group support and accountability goes a long way. Want to stick with your new workout habit, get a workout partner.

Sometimes, breaking a bad habit can me more elusive and it’s critical to make sense of what craving is driving the habit loop. So these steps help

Being more aware of what makes up the habit loop goes a long way to tackling any habit. So, go ahead and take the first step towards breaking or making that habit.